The IBGE adopts a review policy of the data disclosed by this statistical operation. Data review means any and all scheduled revision of numerical data due to new information, which was not accessible at the time of the first disclosure. For instance: late data that replaces a non-response; or data corrected by the informant himself; or a set of data that has undergone editing and imputation. For more detailed information about the published data review policy of the IBGE statistical operations, check the list of short-term, long-term and special surveys carried out by the Institute with their respective revision procedure on: https://biblioteca.ibge.gov.br/index.php/biblioteca-catalogo?view=detalhes&id=298009.

The survey investigates information on the quantity of raw fluid milk, having as collection unit the establishments that industrialize cow's milk under federal, state or municipal sanitary inspection.

The Monthly Survey of Milk began in 1976 and investigated, using the census strategy, the quantity of milk purchased and/or received for processing; the quantity of milk destined for industrialization in the establishment itself; the quantity of milk transferred and/or marketed; and the amount of milk stored. Over time, changes and improvements have occurred in various aspects of the survey - scope; list of informants; frequency of results; methodology; conceptualizations; collection instruments -, which also reflected in its current denomination. Due to the methodological changes, the data from the Quarterly Survey of Milk, implemented in 1997, should not be compared to those of the Monthly Survey of Milk, since they have different characteristics, both in relation to their lists and to the variables investigated. More recently, in 2013, the on-line questionnaire was introduced, and the informant was given the option of data completion on the Internet.

The survey provides information on the quantities of raw milk procured, raw milk received by transfer, raw milk intended for industrialization, and raw milk sold or transferred to other establishments. The establishments which only carry out the cooling of the milk (cooling stations) for the company to which they belong, or for third parties are not considered in the investigation.

The survey is carried out quarterly, and for each quarter of the calendar year the data are broken down month by month. Its geographic coverage is national, being conditioned to a systematically updated panel, with inclusions and exclusions of establishments due to the dynamics of this productive activity. The results are disclosed, preliminarily, to Brazil and Federation Units, with a gap of one quarter between the data collection and its disclosure. The aggregate results of the reference year are released when the results of the last quarter of the year are put out. It should be noted that the data are not definitive, and may undergo changes until the results of the first quarter of the year after the survey's reference year are disclosed.

Meeting users' demands for a sooner access to livestock information, from the first quarter of 2018 on, the First Results of the Quarterly Survey of Milk for the Brazil level have become available. They are disclosed right after the end of the reference quarter, about a month before the general disclosure.

Note: the time series are only related to the complete results of the survey.

Slaughter of hogs and pigs reaches 14 million head in Q2, biggest result since 1997

In the second quarter of 2022, the slaughter of hogs and pigs reached 14.07 million head slaughtered,...

Slaughter of chickens drops in Q2, but slaughter of cattle and of hogs and pigs increases

According to the preliminary results of the Statistics of Livestock Production, released today (11) by...

The results of the animal production in the first quarter of 2022 pointed out that chicken slaughter...

After two years of drops, cattle slaughter grows once again in Q1 2022

Cattle slaughter reached 6.96 million head and grew once again in the first quarter of 2022, after two...

Quarterly Surveys of Livestock - first results: chicken slaughter falls whereas slaughter of cattle and hogs and pigs increases in Q1 of 2022

The first results of animal production in the 1st quarter of 2022 show that the slaughter of chickens...

Chicken slaughter retreats in Q1, but slaughter of cattle, hogs and pigs grow

In 2021, cattle slaughter drops for the second year in a row and slaughter of chicken and of hogs and pigs hits record figures 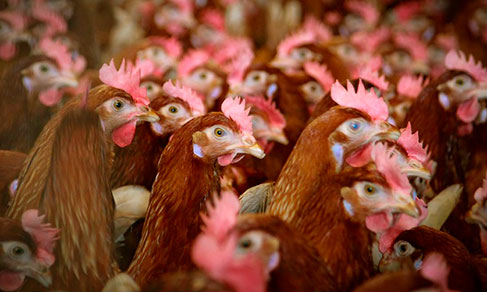 System of Register Maintenance of the Agricultural Surveys

A Computer Assisted Telephone Interview - CATI aiming at updating the registers of the enterprises that answer the IBGE´s agricultural surveys. The main variables investigated are: legal name, phantasy name, address, contact data of the person in charge of answering the IBGE, information on the activity and capacity of the establishment. This activity is developed on a continuous basis, aiming at amending filling errors or updating information.

The availability of reliable and up-to-date statistics depends on the information provided. Therefore, we count on your indispensable collaboration.

We highlight our commitment in protecting the confidentiality of the information provided, which will be exclusively used for statistical purposes. Besides secrecy being a commitment of our institution, it is important to clarify the existence of Law no. 5,534, of November 14, 1968, which hinders the use of information provided to the IBGE for fiscal or legal purposes. At the same time, we remind the mandatory nature in providing this information, also expected in the legislation.

If you have any question, please access the IBGE web page at www.ibge.gov.br . For any additional clarification on SIMCAD AGRO, please contact telephone 0800 721 81 81 or email simcadagro@ibge.gov.br.  The identity of the survey agents can be checked on the website respondendo.ibge.gov.br.

We thank you in advance for your valuable contribution to the updating of this important database, key to the construction of the statistics on the agricultural sector in Brazil.